Jon Alexander of the New Citizenship Project is hosting a workshop at this year’s Meaning conference. In this guest post he examines the role of language in the way we see ourselves and each other. And he invites us to be part of the citizen shift…

Consumer or citizen? Reframing our role in society

Here’s a challenge for you. Every time you use the word ‘consumer’ – whether you write it, say it or even think it – you are holding back the shift towards the future we could create. You are reinforcing an idea of humanity that is outdated and inadequate, in your own head and in the heads of those you work with. You are part of the problem; or, more accurately, you are holding back the tide of solutions.

To be able to see this, you have first to know what the consumer really is. You may think it’s just a word. But language is never inert: it’s the scaffolding on which we build our thoughts, behaviours, values and – most importantly – identities.

This is why the consumer matters – because it’s an identity construct. It contains coded within it an idea of who we are, and what the right thing is for us to do. Every time we use it, we are telling ourselves that what is right is to seek the best possible deal for ourselves from the options offered, based primarily on material self-interest, as narrowly defined individuals, and for the short term. Social psychology experiments show that when we expose people to consumer norms, or even to the word itself, we prime reactions that are more selfish, less open to social participation, and less motivated by environmental concerns. We are telling people not to care.

Understood in this way, consumerism started in the mid-twentieth century, initially as a liberating shift. It brought us a revolution in individual agency in the form of freedom of choice, raising standards through competition. The year 1984, with all its weight of literary resonance, beautifully fills out this picture of the consumer as a positive shift – and represents the idea at its zenith. Apple and Virgin, two iconic consumer brands, burst onto the scene. The idea that we could buy stuff to save the planet and solve global poverty was brought to the mainstream by the Body Shop as it floated on the London Stock Exchange, and by Band Aid as it stormed to Number 1. The Los Angeles Olympics, the first ever to be funded by commercial sponsorship, showed that we consumers could fund global sport and culture too. Madonna even had the poetic decency to cap it off by releasing ‘Material Girl’.

Of course, the golden dream hasn’t turned out that way, and we’re now living in insanity: all the problems we thought consumerism could solve are in fact multiplying, breeding with one another and deepening around us, at least in the mainstream structures of society; and we respond by continuing to do the same things, expecting a different result.

But here’s the good news: consumerism is on its way out and the next great identity construct is on its way up: the citizen. It’s happening everywhere, across every aspect of society, and across the world. Instead of just choosing what we want from the options offered and hoping against reason and experience that if we all do that, the best for society as a whole will somehow emerge, we are, as citizens, exploring our moral and creative agency – shaping what the choices are, and finding new ways forward.

It’s happening in politics, where it manifests as the usurping of representative democracy by participatory democracy. It’s happening in local communities, where the long simmering of self-organising movements unmistakably approaches boiling point – and power.

Perhaps most importantly, though, it’s happening in business, where it manifests as a drastic shift in focus from profit to higher purpose as the ultimate goal and measure of success. Milton Friedman’s famous dictum that “the social responsibility of business is to maximise its profits”, is very obviously falling from its perch.

This is where the work of the New Citizenship Project comes in. Our aim is to catalyse this shift from consumer to citizen, and to do so by helping organisations of all shapes and sizes think differently, and then do differently. From The Guardian to the Co-op to ASK Italian, we’ve been getting involved in all sorts of organisations, sharing our model of the three principles of what we call “Citizen Brands”. They are:

Purpose: A bit of a buzz word admittedly, but we go a little deeper than most on this one. To us, this has to be about the absolute core reason for existence of a business – of which its products are just expressions. We ask “What are you trying to do in the world that’s so big you need people to get involved to help you do it, and so worthwhile they’ll want to?” And if you can’t answer that question, we don’t want to work with you. One of our most exciting projects to date has been supporting Kath Viner, the editor of The Guardian, to define this for her organisation – work that sat behind her landmark 2017 speech “A mission for journalism in a time of crisis”.

Platform: This is all about the involvement. The most exciting part of our work is helping organisations structure ways for people to get involved – because if people are citizens, not consumers, your role is to create opportunities to act, not just products to purchase. One of our favourite outputs from this work has been our Everyday Participation Toolkit,  which sets out seven ways people can get involved in the work of an organisation that exist in the fertile territory between consumption and formal governance. This was created in collaboration with four different major cooperatives, and published for the benefit of the whole sector in partnership with Cooperatives UK.

Prototype: This one is all about ways of working, and the fact that you can’t flick a utopian switch and become a totally different kind of organisation overnight. We help organisations find where the energy is, and build on it. We’re currently running a Participation Accelerator with six organisations and will be publishing the outputs of that, including (we hope!) a methodology for citizen-centred (not just user-centred) design.

The tide is turning. We have a moment in time right now. Our challenge is to respond constructively, and usher in the new era with positivity and courage. If we can seize this moment, this citizen shift, we can create a new, more meaningful, and fundamentally connected society. The world of business needs to be part of that, and it needs to start by stepping away from the idea, and the language, of people as consumers – and toward that of the citizen business.

Jon is founder of the New Citizenship Project.

You can meet him at Meaning 2019 where he will host one of our five optional breakout sessions: Welcome to the Citizen Shift. 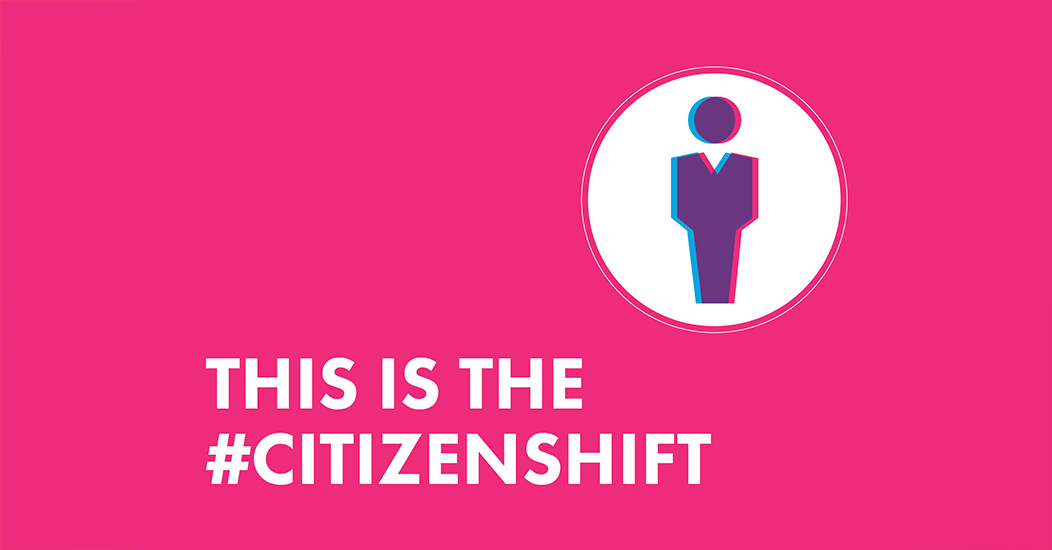 Read more about the workshop

Welcome to the Citizen Shift