An interview with Neil Mullarkey, host of Meaning 2018

A businessman and a comedian… It doesn’t sound like the perfect combo to start that age-old joke. To some, business represents grey, sterile office blocks and weekend jokes shared around the water cooler before the daily grind begins – a world away from the electrifying comedy circuit.

But marry the two and you’ll find Neil Mullarkey: comedian, businessman and host of this year’s Meaning. It is clear that Neil is no ordinary businessman.

We are told that the days of the rat race are numbered. No more the mundane hamster wheel of work and the hierarchical corporate setup. Today’s business is fun, it’s exciting, it’s human. So what better way to capture the essence of what it means to be human than through comedy?

Neil Mullarkey is co-founder of the world-famous improvisation group the Comedy Players – which he founded alongside Mike Myers. He has appeared on a plethora of shows, like Have I Got News For You, Saturday Live, Who’s Line Is It Anyway?, QI and many more.

Neil was once president of the prestigious Cambridge Footlights group, since when he has shared a stage with comedy legends like Eddie Izzard, Dawn French and Eric Sykes. And this year he’ll be swapping his theatrical home for the Brighton Dome, and treading the boards of Meaning, alongside some of the world’s more inspiring business leaders. We hope Neil will be enlightening us on the importance, and effectiveness, of combining business with a little comedy.

So, how did Neil get from Cambridge Footlights to conference frontman? We caught up with him to find out a little more about his journey so far, what he’s looking forward to at Meaning 2018, and what gives him hope…

“I was touring in the Footlights and had a feeling that this life was not for me. We had a week off, and on the Wednesday, I wrote lots of application forms for jobs (advertised in the Guardian), but a wise friend’s advice on the Friday made that impulse subside,” Neil tells us.

“Had I not listened to her, I wouldn’t have met Mike Myers and been part of the Comedy Store Players, which came to define the majority of my career. But now, I often work alongside people in the type of jobs that are advertised in the Wednesday Guardian, running workshops, coaching leaders and giving keynote speeches…”

Neil has worked with global business giants such as Barclays, Unilever, Google, Microsoft, Saatchi & Saatchi, and the NHS – bringing the innovation and agility of improv comedy into the boardroom, transforming business for the better. Changing businesses from the inside out, Neil’s work encourages communication, collaboration, engagement and creativity – the lifeblood of the future world of work.

So, why does business need to change its reputation? And how is Neil’s work helping?

“I read a lot about Marxism at university. There did appear to be a contradiction between capital and labour. But my dad was a businessman. He wasn’t exploiting the workers. He was a ‘worker’, even if he wore a suit. And his pension depended on how well invested the capital was by the fund into which he and other workers paid,” says Neil.

“David Ricardo helped me understand that there are three elements – humans, the land, and the tool to work the land. If the human has a better tool, fewer humans are needed to work the land or they can work a bigger area of land; so, it will produce more to eat, or the humans can take more time off (that could be explored more, I feel). So, investing in a better tool is a good idea. Things get complicated when you produce more than you can eat. You need someone to buy what you produce, at a price they can afford and that makes it worth your while. Then money comes along…

“The problem, as suggested by Thomas Piketty, and warned of by Marx, is that it seems that over the last century or so, just owning the land has proved more profitable than working hard or investing in better tools.

“I have met many fine people who are working in ‘capitalist’ organisations, large and small – and indeed many ‘capitalists’ whose ‘tool’ is money. We need the system to work well so that we don’t have to keep our cash sewn up in the mattress; and can have access to mortgages, credit cards and fingertip mobile banking. But, something has gone very wrong when people don’t have enough to eat, or have to live on the street, or cannot even imagine a time when ‘saving for the future’ could be feasible.”

So, what’s the biggest barrier to creating a more humane world? And how can innovations in business get us there?

“In our society, we need much more and better housing, which doesn’t cost such a high proportion of people’s income. When I read that one in ten people owns a second property but that four in ten own no property, I feel very uncomfortable…

“All over the world people need, at the very least, homes that are safe from natural or man-made disaster.

“Business must play a role in this – not just the state or the third sector. It suddenly hit me yesterday that, as the industrial revolution took off, employers took this seriously. They built homes for their people. Look at Port Sunlight (Unilever), Bournville (Cadbury) and New Earswick (Rowntree). Replicating that may not be straightforward in the twenty-first century but what could be a workable equivalent?”

Three monoliths of today’s business world, Unilever, Cadburys and Rowntree started their lives with humans at their heart – putting people before profit, and maximising employee experience and wellbeing, in order to run smart business. Business has since gone full circle and come out the other side. Having travelled through the bleaker profit-driven decades, today’s businesses are seeking out human experience and interaction in order to compete in the new human economy. Which are the modern business inspirations? We put the question to Neil…

“Not one individual [inspiration] but a type of person,” says Neil.

“Because of how our world has developed, she is often female but not always. She works tirelessly. She is trusted. She or he knows people and what really matters. Certain individual leaders, and indeed entire businesses, simply could not operate without her or him. The ‘org chart’ may not even mention her role but she is a linchpin. She has a great sense of humour and ensures things gets done but shuns the limelight.”

They may not covet the limelight, but our speakers at the year’s Meaning will certainly be stepping into it… We asked Neil what he’s most looking forward to at this year’s conference, and why he’s coming back (Neil was a speaker at Meaning 2014, hosting a very memorable and inspiring session).

“I had a good time last time – seeing great speakers from whom I learned a lot. And my session was fun and seemed to make sense.” says Neil.

“Plus, I love Brighton.” he added.

What do you expect to take away from Meaning 2018?

“I want to learn what gives people hope at the moment. What kind of world are we leaving to future generations? So much is worrying – climate change, division, war, the dark side of digital.”

And who are you most looking forward to seeing?

“Amy Whitaker for her academic view on arts and business, and Eva Gouwens and Helen Taylor for their insights on how to address some of the above challenges in a really practical way.” he says.

Our conversation continued for some time, meandering through recommended reads (The Little Prince by Antoine Sainte-Exupery); to the last book he read (A Legacy of Spies by John Le Carre), before we reach Neil’s personal mission:

“I think there is meaning in the smallest things and in the largest,” he says. “My answer may have changed through time. Perhaps I used to think it was to ‘make the best of myself’, not to waste any of my talents. Trouble was, I wasn’t entirely clear what those talents were. Now, I think I have found them, I’m in a position to try and ‘bring out the best’ in others.”

In a bid not to steal all his lines, or ruin any punchlines, we’ll leave the conversation here… But, make sure to pick it back up again at Meaning 2018. 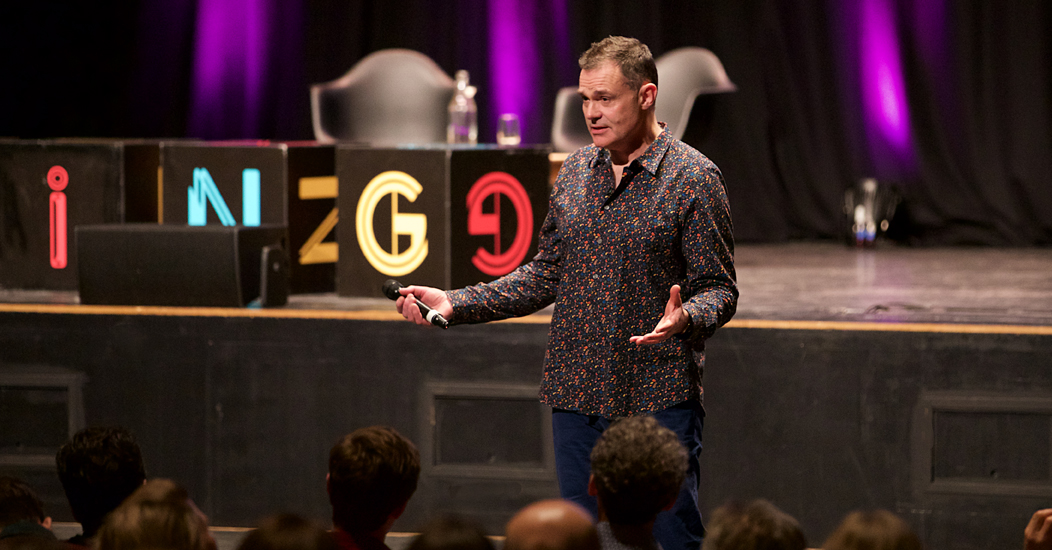