The ideas, stories and challenges at Meaning 2019 were as varied as they were powerful. Here, journalist Claudia Cahalane distills from our latest conference her seven key take-aways from a day full of energy…

1) Elections and referendums don’t work for the greater good

(And Hitler was also a big fan of referendums, just saying.)

Brits are perhaps more aware of the problem with elections than ever since Thursday 12 December 2019 (the date of the last UK General Election). Brett Hennig – author of The End Of Politicians: Time for a Real Democracy – put across his case for citizens’ assemblies. He believes such assemblies should make decisions for a country, instead of politicians.

The recent election made us acutely aware of how politicians can very openly lie or be disingenuous on huge matters of public importance and not be held to account. Hennig advocates enlisting representative, but randomly selected, members of the public into citizen’s assemblies. Citizen’s assemblies do already exist and feed into political decision making in several locations around the world.

Last month, the UK parliament sent out letters to 30,000 people asking them to be a part of a citizens’ assembly on climate change.

We are billions of people on this earth. There are lots of similarities between us. But Nilofer Merchant, author of The Power of Onlyness, encouraged us to think about our ‘Onlyness’. Our Onlyness is the point of view that only we have. No one else has lived quite the existence that each of us, as an individual, has. Remember that you have something to offer that absolutely no one else on this earth can.

A former Apple executive, Merchant believes that few industries or brands will survive the coming AI and commoditisation unless they understand Onlyness. She describes this as the “experience, talent, perspective, and purpose lying untapped in our own people.”

In 2013, Nilofer was recognised as the number one person most likely to influence the future of management in both theory and practice with a Thinkers 50 award.

Clare Farrell, co-founder of Extinction Rebellion, gave an impassioned speech which brought the room to tears. She was not hopeful that we will save the planet, and said it was time to face reality and to face our own death.

Farrell said climate change work was about being in love with the process. It is about believing in what one is doing, rather than being attached to outcomes or being in it to win, she told Meaning. For those wanting to help, she suggested we ask ourselves ‘What’s the next big thing I can do in being in service to life?’

Investor Armin Steuernagel is a firm advocate for ‘steward-owned’ companies – defined as being owned and run by their employees. All profits serve the purpose of the business in the long term, rather than looking for short term gains.

Steuernagel, who is co-founder at Purpose Ventures and Purpose Evergreen Capital, showed us some interesting research around the success of such companies. In particular, he noted that steward-owned businesses were six times more likely to survive when compared to other companies. Steuernagel also said that research showed divorce rates were lower at such companies

5) Preston is possibly the UK’s most economically sustainable city

Preston in the UK was once seen as one the most deprived urban areas in England. But, in 2011, its council committed to using more co-operatives to improve economic development. This has been a huge success. Sarah McKinley, director of European programmes for The Democracy Collaborative, told us that £75million had been returned to the local economy since the council’s decision to embrace co-ops.

In 2018, Preston was named the most rapidly improving urban area in the UK to live and work. The research was by accountancy firm PricewaterhouseCoopers and the think-tank Demos. It charted 42 UK cities. The research used measures including employment, workers’ pay, house prices, transport, the environment, work-life balance and inequality.

Agamemnon Otero, from Repowering, has a huge amount of experience in the community renewable energy sector. He told Meaning that “Men have nothing compared to the energy of the women who run renewable energy co-ops.”

“I’ve been to hundreds of these coops across the world and it’s always a woman running them; it’s about matriarchs,” said Otero. “Energy co-ops are facilitated consistently by incredible women. They’re usually aged 40 – 74.”

Otero also suggested that those dreaming of a sustainable life off-grid in nature, should instead “rip up paving stones, plant potatoes and cover them in solar panels” to bring more sustainability into their communities.

7)  Lack of homes is not the biggest crisis in society

Maff Potts’ presentation was both sad and deeply heartwarming. He worked for 20 years in the homelessness sector before founding Camerados. He has also been homeless himself. But he said that there’s something possibly more important than homes that society needs more of. That thing is friendship.

In his job, Potts worked hard to find people homes and jobs, but they kept coming back to the system. He eventually realised it was usually because people didn’t have friends and community connections. “We asked people plenty of questions,” he said. “But we never asked if they had any friends.”

He knew he couldn’t supply friends in the way he could supply jobs, but he wanted to create a welcoming environment where people have the space to find community and find friendship. So, he started setting up ‘pop-up’ public living rooms on street corners, in hospitals, in universities and anywhere else he possibly could.

The living rooms have been a great success. They include items such as sofas, fairy lights, conversation starter cards and postcards on which to write about your experience. The movement  is called Camerados. The completed postcards he shared with us from the stage at Meaning revealed how the pop-up spaces have completely changed, and saved, many lives. In one day alone at Bristol University, 700 people used a Camerados’ public living room.

Maff invited us all – including you – to set up a living room. 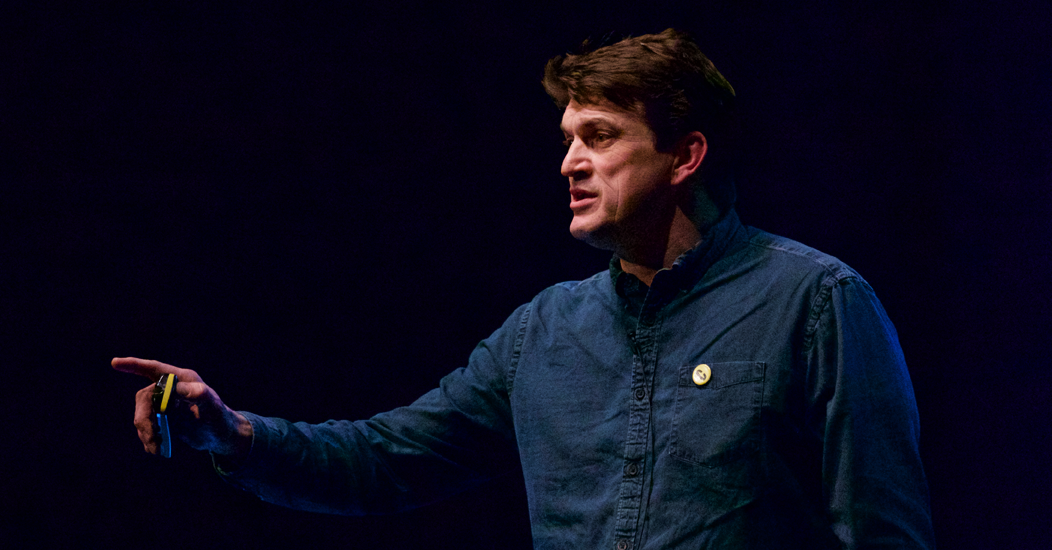 watch the talk from